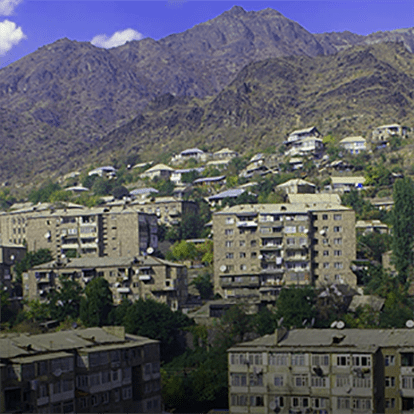 Alaverdi is a town in the Lori Province at the northeastern part of Armenia, near the border with Georgia. It is located at the only direct rail link between Armenia and Georgia. Situated at the bottom of the Debed river gorge, Alaverdi is an important commercial and industrial centre in northern Armenia.As of the 2011 census, the population of the town is 13,343․

Alaverdi is on the shores of Debed river canyon 1000 meters above sea level, surrounded by high mountains and green forests. The Debed river flows through the centre of the town dividing it into 2 parts.

Alaverdi is a gateway to such famous sights as Haghpat and Sanahin monasteries and Odzun church. Mikoyan Brother’s museum is also located in the city. It’s dedicated to Anastas and Artyom Mikoyans, who were influential and prominent people in the USSR political and military history. Moreover, Artyom Mikoyan was the designer of the USSR’s first jet fighter in the World War II (known as MiG). Mikoyan Brother’s museum  houses a unique collection of uniforms, medals and photos, as well as aircraft plans and drawings.

Alaverdi is a major railway station on the Yerevan-Gyumri-Tbilisi line. M-6 Motorway that connects Yerevan with Tbilisi, passes through Alaverdi.The southern half of the town is connected with its northern counterpart through bridges over the Debed river, as well as a cableway.

Sanahin was also the birthplace of Artem Mikoyan the internationally famous aircraft designer and father of a whole family of Soviet MiG jet fighter aircraft one of which stands on a pedestal outside a former school which is now a family museum.