You are here:
historicalshirak historical 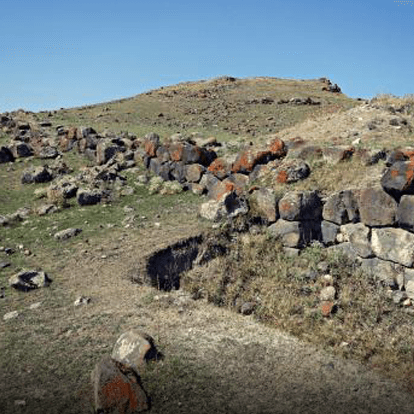 There is not much left to Horom Citadel. The once great fortified city is now little more than a collection of stone walls. We visited in September 2015 and spent a half-hour or so walking the ruins. With a bit of imagination it is very easy to see the ancient city. Climb to one of the nearby hilltops and you’ll see that from horizon-to-horizon there are remains of large walls that once protected this place. We saw evidence that there have been recent excavations, however there did not appear to be ongoing work of any kind.

Unfortunately there are Soviet-era high-tension electricity wires running right through the site, which detract from the historical atmosphere. Also, much more unfortunately, it appears many locals use this area as a dumping ground for household trash. Dumping trash in places like this is very common in Armenia — and Armenians should be ashamed of themselves for treating their historical sites this way.

Still, this place is quite interesting, especially if you know a bit about the history. If you’re driving through here, definitely stop and check it out. There are no facilities or information panels, so read the WIkipedia article before you come.
Horom Citadel s an ancient Bronze Age through Urartian fortification atop two large hills south of the main road and opposite of the dam and Kamut Reservoir. It is about 1 kilometre (0.6 mi) east of the village of Horrom in the Shirak Province of northwestern Armenia. Not far from this location in Ghak and Shvaghtapa are two Urartian cyclopean forts.
Horom is considered to be one of the most impressive archaeological sites in Armenia because of its unique architecture. There are potsherds and obsidian flakes strewn on the surface of the ground. Recent excavations have been underway at the site recently by Armenian and American archaeologists led by Ruben Badalian and Philip Kohl. The teams have uncovered well preserved fortification walls as well as large amounts of cultural artifacts that have given insight into those who once resided at the site.