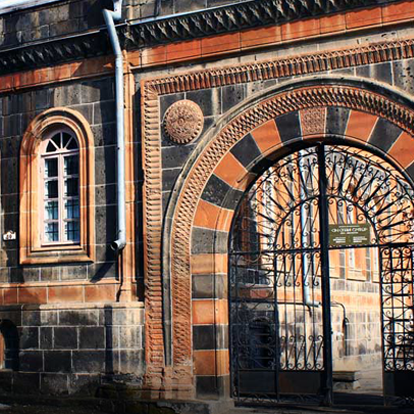 Hovhannes Shiraz is a Gyumri born outstanding Armenian poet.His first work called Beginning of Springwas published in 1935. Novelist Atrpet gave the talented poet the epithet Shiraz, because this youths poems have the smell of roses, fresh and covered with dew, like the roses of Shiraz.
His house museum is located in Shahumyan Street, where that part was renamed as Varpetats street. The house was built in 1883 by a rich Alexandrapol citizen Qeshishyan. The western facade has a luxurious gate leading you to the inner yard. After the Soviet revolution, the house was confiscated and served as a residential block. In the 1980s apartments were allocated to the families who lived in the museum and in 2003 the house museum of Hovhannes Shiraz was officially opened in that building. The house was presented to the poet long in 1983; unfortunately the poet lived there for less than a year, as he passed away in 1984.