You are here:
historicallori historical 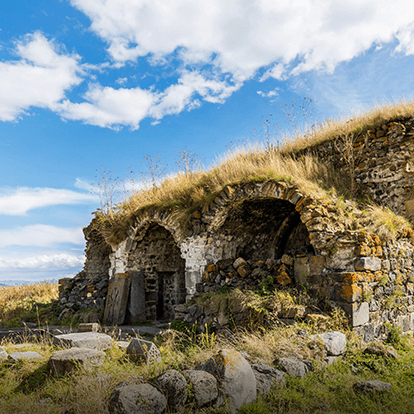 In the western settlement of Lori-Berd near Stepanavan, Armenia, surrounded with wonderful mountain landscapes is found the ruins of one of feudal Armenia’s capitals  Lori-Berd. David Anhoghin of Kyurikid’s branch of Ani’s Bagratid dynasty founded Lori-Berd as an inaccessible fortress town in the Gugark region of northern Armenia in 989-1048, and moved the Tashir-Dzoragetian kingdom capital here from Samshvilde.

The investigations of extensive remains in the territory of the town showed that the choice of the place for foundation and the dislocation of its compound parts were made like Ani the capital of the Bagratid’s kingdom.The town stretched on a mountain plateau of almost triangle shape, bordered by deep ravines of Miskhan and Dzoraget rivers.The uptown was situated in the pointed part of the cape and occupied a territory of 9 ha. It was reliably protected by the strong defensive which was rather tall, averaging 21.4m high, stretching from one ravine to another and fastened more than once (in some places its width came up to 20m). The vaulted gates of uptown were situated in the east-west wall along which, from the outside there had been a ditch which filled up with water through the underground channel. For protective purposes a secret water passage (jri tzampa – road of water) was also used. While coming down from the east-west edge of the uptown to the ravines of Miskhana river, in the final part it went through a steep tunnel and entered a round tower erected around the spring welling out from here.

Ruins of various buildings including two bath- houses are preserved in the territory of uptown. Besides the two main defensive walls mentioned above, there were in surrounding ravines, primarily along the Miskhan river, in some places accessible to enemy, some extra fortifications walls.

Like Ani and other towns of medieval Armenia, the described defensive complex had a main purpose- to safeguard the town. The town of Lori-Berd excelled in its defensive fortifications and was famed for being inaccessible.During Zakarid reign building was done: the defensive walls were fastened bridges and other buildings were constructed.

The great importance of the town during this time is evidenced by the convocation of all Armenian churches in Lori, in which took part such outstanding personalities of Armenian Church as were Mkhitar Gosh, Khachatur Torontetsi, Hovanes Sanahitsi and others.

In the territory of the town and outside of it during 1966-67 and 1969-1973 archeological excavations were made, which discovered interesting material from the Bronze and Early Iron Ages as well as medieval times.