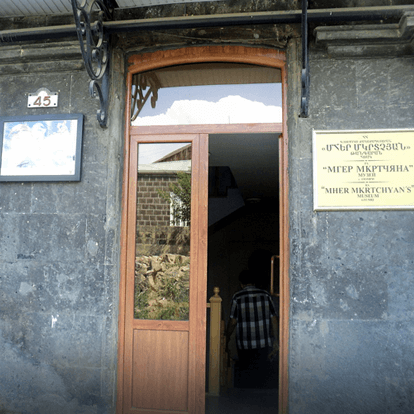 The third museum in this area belongs to Mher Mkrtchyan, one of Armenians favorite actors. He was born in Leninakan in 1930. He is a widely known Armenian actor who performed both in theatre and in cinema. Some of his most famous movies were filmed in Leninakan, including The Tango of Our Childhood, directed by Albert Mkrtchyan, Mher Mkrtchyans brother. His museum is located on Rustaveli Street in a 20th century building made of black tuff. The building was used to be a residential block during the first half of the 20th century, then after the Soviet Revolution the building was nationalized and had different functions. It was badly damaged during the 1988 earthquake. The Rustaveli street part was reconstructed andMher Mkrtchyans museum was opened in 2004, while the official opening ceremony was held in 2006. The museum covers the life and career events of the great actor.
*Spiritual piano music evenings are very often organized here by local Gyumri pianists. Please, ask the director of the museum for the ongoing events in the museum.