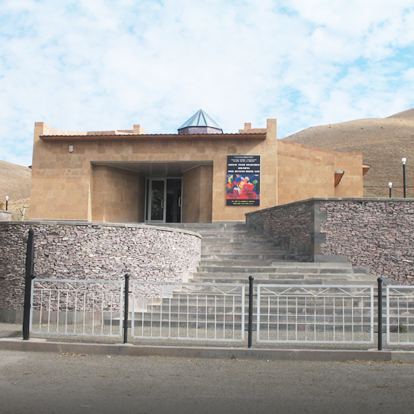 The Museum of Minas Avetisyan was founded in 1982 in the artist’s birthplace, in Jajur village.
The museum building was destroyed after 1988 earthquake and after the reconstruction it was reopened in 2003. It includes the collection of the Yerevan Studio which has been the branch of the NGA since 1979. Now the museum houses the works of the artist and his contemporaries.
Minas Avetisyan was one of the most prominent figures of Armenian painting of the 2nd half of the 20th century. He managed to combine contemporary trends of depiction with traditions of old Armenian painting.
In 1960’s, in the period of maximal advancement of the national fine arts, Minas presented his original pictorial language and profound national art.
In the portraits, landscapes and still life paintings the artist’s imagination surrenders to the objects, living forms and colouring. But most of his works were drawn from memory and imagination as recollections of various events and places, as personal and universal thoughts.
Minas was also the author of a number of frescos and stage decorations.
Address: Village of Jajur, Shirak Region
Tel: (+374 031) 26-66-84
The name of Minas is pronounced with particular affection in Armenia. He devoted the whole of his tragically short life to art.
Founded after the death of the artist in 1975, in his studio. The establishment of the museum is largely the accomplishment of the founding director Gayane Mamajanyan. The museum stock contains 20 paintings by the famous artist, of which 7 are in oil (including Woman With Chandelier) and the rest are drawings.
While in Saryans works colour is subjugated to the light of the sun, in those of Minas colour has an agitated, passionate, sub-tragic edge. A way of life formed over the centuries torn up at the roots, irrevocable changes in human relationships, and the anxiety of contemporary man all gave his work a sub-consciously dramatic nature.
The intense colour of Minas work was dictated by the mossy surfaces of the cliffs singed by the sun, cliffs which seem to represent mysterious eternity. Each of Minas pictures is a lovingly told tale of his native land, the powerful colour harmony full of life-asserting power.
Three years before his death under the wheels of car which swerved onto the sidewalk, a fire in his studio destroyed a large proportion of his work. Fate seemed to be against him even after his death, for an earthquake demolished part of his frescoes in Leninakan and flattened the museum devoted to him in his native village of Djadjur.