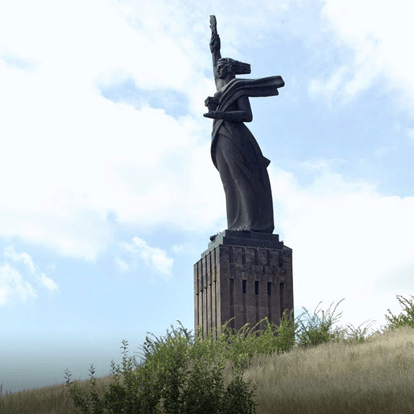 When enjoying the Black fortress, you will also see the Mother Armenia monument standing tall at the western part of the city. The monument was built in 1975 by sculptors Ara Sargsyan and E. Vardanyan, and the architect is Rafik Yeghoyan, renowned Armenian architect from Gyumri. It features the victories of the Armenians, namely the Soviet victory in the Second World War. The proudly standing Armenian woman statue symbolizes the victory holding wheat spikes in her hand. The monument is made of bronze and is the biggest monument in Gyumri.
*When looking at the statue from the Armenian side you will see a victorious woman but if you look at the statue from the Turkish or Western side it looks like an attacking dragon.
Sculptors: A. Sargsyan,E. Vardanyan