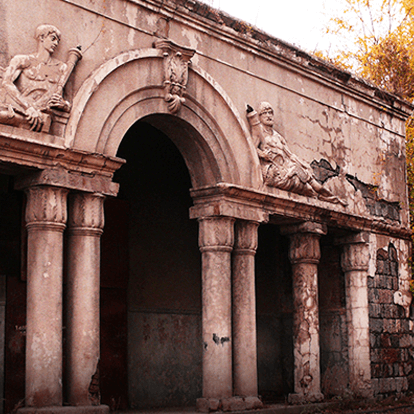 he white building of Gyumri Old Theatre, previously known as Folk House stands tall at the very beginning of Gyumri Central Park. This building with 150years of history was built with the funds of Alexandrapol people. During the time it has served the community as a folk house and was the main place for concerts, literature evenings, open discussions, poetry gatherings, theatre performances, etc.. Anush- the first Armenian Opera by Armen Tigranyan, was premiered in this concert hall in 1912. In 1930s of the 20th century the Drama Theatre after A. Mravyan was located in this building, and then it served as the Culture Palace of the Constructors. After the 1988 earthquake, the Shirak TVR was located in the building. Now, the old Opera House belongs to Gyumri community. A decision was made to allocate the building to Tumo Center for Creative Technologies to have it renovated and later become a creative technology center for the youth of Shirak Regions.