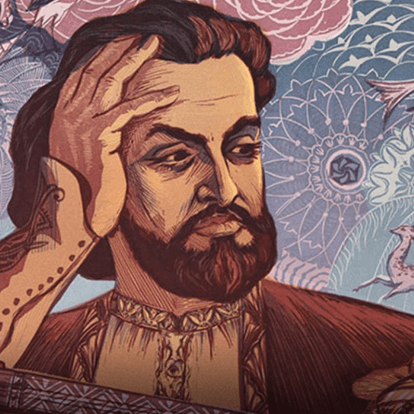 Sayat-Nova (Harutyun Sayadyan) was an Armenian poet, musician and ashugh, who had compositions in Armenian, Georgian, Azerbaijani, and Persian.The name Sayat-Nova means “King of Songs” in Persian. Sayat Nova was born in Tiflis in 1712. He was skilled in writing poetry, singing, and playing the kamancheh, Chonguri, Tambur. He performed in the court of King Heraclius II of Georgia, where he also worked as a diplomat and, apparently, helped forge an alliance between Georgia, Armenia and Shirvan against the Persian Empire.He lost his position at the royal court when he fell in love with the king’s sister Anna; he spent the rest of his life as an itinerant bard.
From 1759- 1795 Sayat Nova served in Haghpat Monastery as a priest, where he was killed by the invading army of the Shah of Iran. for he refused to convert from Christianity to Islam.
Sayat Nova is considered a great poet who made a considerable contribution to the Armenian poetry and music of his century. Although he lived his entire life in a deeply religious society, his works are mostly secular and full of romantic expressionism. About 220 songs have been attributed to Sayat-Nova, although he may have written thousands more.