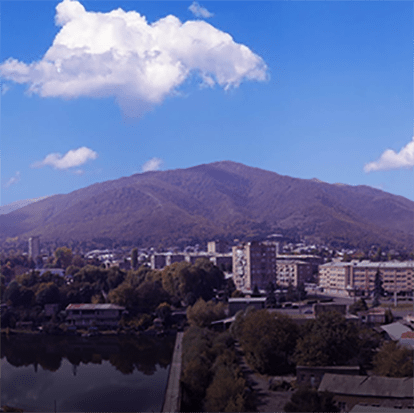 Vanadzor is the third-largest city in Armenia and the capital of the Lori Province in the northern part of the country. It is located around 128 kilometres (80 miles) north of the capital Yerevan. As of the 2011 census, the city had a population of 86,199, down from 148,876 reported at the 1979 official census.

The city is in a picturesque setting, with an attractive planned town centre. Mostly crumbling Soviet-era chemical factories dominate much of the valley below the city.

Vanadzor is composed of two words, Van referring to the historic Armenian city of Van in modern-day Turkey, and dzor, meaning valley in Armenian. Thus, the name of the city means the ‘valley of Van’.

The area of present-day Vanadzor has been settled since the Bronze Age, based on the tombs and other historic remains found on the nearby hills of Tagavoranist and Mashtots. During the ancient Armenian kingdoms, the area was considered as part of the Tashir canton of Gugark; the 13th province of the Kingdom of Armenia(Armenia Mayor).

During the Soviet times it was a major resort due to numerous mineral springs in and around the city. Vanadzor Armenia Health Resort & Hotel is still a major reason to visit the city. History buffs will appreciate the nearby Mashtots hill which has impressive remains from Bronze Age. Make sure you visit also Vanadzor Fine Art Museum and Lori-Pambak Geological Museum  of Vanadzor during your stay in the city. Those who want to enjoy Vanadzor nature are advised to spend some hours in Vanadzor Botanical Garden and Vanadzor Central park. Spending an evening at Jazz Café of Vanadzor will guarantee nice time  in a cozy atmosphere.  Saint Gregory of Narek Cathedral and Church of the Holy Mother of God are mostly known destinations among locals and foreigners.

Vanadzor is also a major gateway to the other attraction of Lori province, like the famous monasteries of Haghpat and Sanahin and the historic village of Odzun.